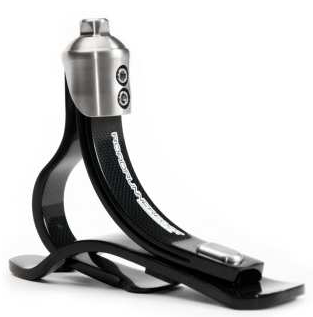 Roadwalking foot is an highly dynamic foot for active people, with a mobility level 4 (K-level).
Its 3 laminated structure allow a foot’s response during all stance phase: in every moment at least 2 laminates work together to support the amputee user in his/her daily activities, one laminate absorbs energy, the other returns it .
A user buys usually a foot giving him an interrupted walk: there are moments in which the prosthetic foot doesn't work, between heel and forefoot and near the final stance when the propulsive push is given by foot fingers and for the prosthetic foot by the last 2cm of inferior laminate.
Roadwalking is composed by 3 main laminates:
an inferior laminate, which define the calcaneus and the forefoot; The inferior laminate starts its work during Initial Contact: the durability and elasticity must allow to load weight with a shock absorption function to guarantee comfort to the user, but at the same time guaranteeing stability. Its functions stops during the final phase of Toe-off, when the forefoot gives the final propulsion.
one posterior laminate, which define the heel and functions like soleus-Achilles’ tendon apparatus; soleus work in eccentric contraction during second rolling, to steady the foot on the sagittal plate; when the foot reach the contact with the ground, during mid-stance, the posterior laminate starts loading weight and releasing propulsion, allow the transition from Mid-stance to final stance phase.
two superior laminates, which define the instep and functions like anterior tibialis muscle permitting a gradual roll-over until forefoot touch the ground managing the transit from Initial Contact to the Mid-stance phase. Through their loading, they guarantee dorsiflexion during Mid-Stance phase and plantar-flexion during final propulsive phase

Don't have access?
Call for your free login credentials.
33118557 All fields are required.

Please check your email for your authorization code.